Born in 1912, Vernon Elliott was a bassoonist, trained at the RCM and was subsequently principal bassoon in a variety of ensembles: the Bournemouth Municipal Orchestra, Sadler's Wells Opera Orchestra, sundry dance bands, the Band of the Irish Guards, the (New) Philharmonia, Orchestra of the Royal Opera House, Covent Garden and the English Opera Group and ensembles to do with film and television.  His career as a TV composer began when ATV was looking for someone to write a bassoon tune for a children's cartoon about an anthropomorphic railway engine.  This was, of course, Ivor the Engine, and the tunes Elliott composed became so popular that they have been done successfully as concert pieces.  He went on to write tunes for other children's television programmes: Noggin the Nog, The Pingwings, The Clangers, and Pogle's Wood.  Vernon Elliott sadly died in October 1996.

Published on 9th June 2000, "Seeing Things" is Oliver Postgate's autobiography.  You can order a copy of this book now at a 20% discount from amazon.co.uk by clicking on the cover illustration or on their logo below. 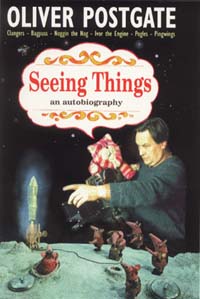