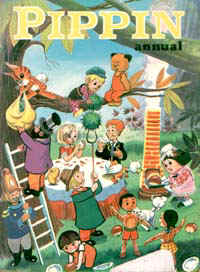 During the late 60's and the 70's, Pippin annuals were de rigeur in any self-respecting child's Christmas stocking.  Published by TV Publications who published the weekly "Pippin" comic, the annuals contained a host of comic and illustrated text stories based on children's TV characters of the time, with the obligatory colouring-in and puzzle pages.  A large proportion of the characters were either of the Trumptonshire ilk or the creations of Peter Firmin and Oliver Postgate, particularly "The Pogles".  Indeed, the son of Mr & Mrs Pogle, Pippin, presumably gives his name to the comics.  Although not a permanent feature, from time to time the annuals would also feature Noggin the Nog stories.  These were original stories, not derived from the books, and were written and  illustrated true to form.   However, there are no credits for the stories or the illustrations, so whether or not they were by Oliver Postgate and Peter Firmin, I don't know.  Judge for yourself in the story of...

Olaf the Lofty was very pleased with himself.  He has invented a pair of trousers, a pair of handsome, best quality trousers.  Well, you may not think that that was much of an invention and you would be right, but these were very exceptional trousers.   Like all really good inventions this one was perfectly simple.  The trousers had a double seat with a thick layer of sheep's wool sewn in between as padding.  In these trousers, Olaf the Lofty, who was, as you know, a very thin and bony inventor, could sit on the hard rocks by the seashore and think important thoughts.  He could go skating and fall over (and he always did fall over when he went skating) without hurting himself.  Yes, that was a really good invention.  He did up his braces and ran to show it to Noggin.

Now in the palace, Noggin, Thor Nogson and Noggin's young son, Knut, were very busy.   They were making invitation cards for Nooka's birthday party.  As Noggin was a king these cards had to be rather more than just a bit of paper with "Come to Nooka's Birthday Party" written on them.  Noggin had to compose a proper formal invitation with lots of long words and a decorative border.  There were more than two hundred of these invitation cards to be sent out, so they had a lot of work to do.   Noggin was writing out the invitations on cards in black ink and Knut was painting decorative borders around them.  Thor Nogson was helping by stacking the new cards and the painted cards on the chairs and steps of the throne room.

Olaf the Lofty burst in on them, full of delight at his own cleverness, and I am sorry to say Noggin was not really very pleased to see him.

"I have made an invention!" shouted Olaf.

"Oh, have you?" muttered Noggin, without looking up from his writing.   "I wish you could invent something to write out invitation cards."

"Oh no, this is something much better!" explained Olaf.  "This is a pair of trousers!"

Noggin put down his pen.  "Now Olaf," he said sternly.   "Surely you haven't come here just to tell me you invented a pair of trousers!   Trousers were invented hundreds of years ago, and I am busy writing out these cards."

"Ah, but these are very special trousers," said Olaf.  "I want to show them to you."

"Oh, all right Olaf," said Noggin.  "I will look at them as soon as I have finished this card.  Sit down somewhere and wait."

"Not there!" shouted Thor Nogson.  "Oh, Olaf, you clumsy great goat!  You have sat on one of the newly painted invitation cards."

Olaf jumped to his feet.  "Oh, my new trousers," he wailed.   "You have ruined them, and I only made them today!"

"I have ruined them?" Thor Nogson was furious.  "It was your fault for not looking where you were going to sit."

"It's your fault," shouted Olaf.  "You shouldn't put wet painty things on chairs."

"Be quiet the pair of you," said Noggin.  "I am trying to write elegant writing... and Thor Nogson, for goodness sake peel that card from the seat of Olaf's trousers.  He looks silly like that."

Thor Nogson peeled off the card.  It wasn't too badly smudged.  Olaf sat down again.

"Not there!" shouted Thor Nogson.  "Oh Olaf, you are the stupidest, clumsiest inventor that ever lived!"

"Why?  What have I done now?" asked Olaf righteously.

Thor Nogson explained: "You are sitting on the new clean cards, and you know perfectly well that the seat of your trousers is covered with paint from when you sat on a painted card.  Now do you know what you have done?"

Olaf stood up sheepishly.  "I'm sorry," he said.  "I expect I have spoiled another card."

He hadn't.  Thor Nogson looked at the card Olaf had sat on.

Noggin came and looked at the card.  On it was a perfect copy of the invitation card.

"Olaf did it," said Thor Nogson.  "He must have done it with the seat of his trousers."

Noggin took a clean card and placed it on the Royal Throne.  "Olaf!" he commanded, "Sit!"

Olaf the Lofty stepped forward, turned, and very carefully sat on the Royal Throne of Northland.

"Very comfortable," he said.  "Now I know what it feels like to be King of the Nogs."

Olaf stood up.  There on the throne lay another perfect invitation card, a little paler than the one before, but quite legible.  Olaf stood up and sat down twice more and provided two quite good invitation cards.  Then they sat him on another newly-painted card and from this he sat out four more.

"That is really good, Olaf," said Noggin.  "Now I am going to invent something."

With a long pole, some stout rope, a heave weight, some boxes and the hanging candle-holder, Noggin made a contraption, a sort of dangling see-saw, with Olaf the Lofty at one end in a sling affair and Thor Nogson at the other end.

It worked well, Knut and Noggin painted invitation cards and laid them on a box, while Thor Nogson set clean cards on four more boxes set in a half circle.  Then Thor Nogson would swing Olaf up in the air and bump him down, first on all the newly-painted card and then bump, bump, bump, bump, on the four clean cards.  In this way from every card Noggin and Knut painted, Olaf's trousers painted four more cards.

"That was a really good idea, Olaf," said Noggin when they had finished.   "You could invent a printing press and print whole books that way!"

Olaf did not look pleased.  After printing two hundred cards, the only invention Olaf felt really glad he had invented was the padding in the seat of his new leather trousers.