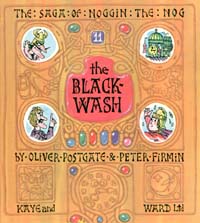 As Noggin returns from a great journey to the South, he brings back with him memories of lands where the houses were smooth and painted with glass in the windows, and some even had devices showing how much of the day had passed. Arriving home, although glad to be back, Noggin feels somewhat shamed at the primitive state of his own kingdom compared to the South. He decides it is time for a new age of culture. The Nogs aren't overly convinced, but obey their king all the same.

To start, the Nogs set about whitewashing the grey stone walls of their houses (and just about anything else that doesn't move quickly enough!), and soon the town is transformed. Even Nogbad the Bad joins in, but naturally paints his castle black rather than white. Pleased with progress, Noggin decides to have a new throne room built in the style of the South, and so a marvellous building is erected in a classical style previously unseen by the Nogs. On top of the tiled roof stands a small, decorative empty tower. When Thor Nogson and Knut speculate as to the purpose of this cupola, he remembers the devices from his travels and decides the cupola needs a clock. Noggin explains what a clock is to his people, whose only previous concept of time was based on when the sun rose and set and when they were hungry. With the Nogs intrigued by the idea, it is decided that there will be a competition to build a clock for the tower by midsummer's day, much to the disappointment of Olaf the Lofty who has already designed one engineered from numerous pipes, barrels, wheels and leather loops.

As the deadline for the competition approaches, the roads are filled with people wheeling and pushing various fantastic contraptions towards the throne room. Scornfully, Olaf examines the mechanisms of the various clocks, knowing that his water-powered machine will be the biggest and best clock. In fact, Olaf's machine is so big that he has to build it inside the throne room, and even then the machine protrudes through the roof and two barrels containing the water to drive the clock sit outside on either side of the cupola.

As midsummer's eve arrives, a line of Nogs form up with buckets and ladders and set about filling the barrels of Olaf's clock as the soldiers lock the doors to the throne room full of the competitors and their clocks as the deadline is reached. As the clocks start to squelch, clink and rattle to life, there is a knock at the door. It is Nogbad, with a clock of his own to enter. Compared to the others, Nogbad's clock is very simple, having the appearance of a small house. As the Nogs look on, a small door opens in the front of the clock and a small bird pokes its head out with a "cuckoo".

Despite the fact that the Nogs are spellbound by Nogbad's clock, Olaf insists that his clock is the best, despite the fact that Thor Nogson points out that it doesn't seem to work, and he continues to work on it. However, Nogbad goes on to tell Noggin that his clock is no ordinary clock, but is capable of commanding time itself. To demonstrate, he turns a lever on the back of the clock and its ticking becomes slower. The cuckoo slowly comes out of the door with a feeble "Cooo". However, Thor Nogson is not convinced and laughs off Nogbad's claim. Undaunted, Nogbad turns to Noggin and bargains that if Noggin gives him the throne of the Northlands, he will save the land from a terrible fate. He then turns the lever at the back of the clock once more, and the clock starts to tick backwards and the hands start to move anti-clockwise. Soon the cuckoo re-appears with a distinct "Coocuck!" Nogbad gleefully informs the Nogs that time is now running backwards, and only he can stop it.

Although the Nogs are at first sceptical, they are soon horrified to realise that, sure enough, it is getting dark outside, despite it still being morning. As Noggin contemplates what to do, Olaf the Lofty, high up in the roof of the throne room, continues his frantic attempts to get his clock working, totally oblivious to the drama unfolding below him. As the last of the dawn's light fades, and with a cry of triumph, Olaf pulls a lever on his clock and the giant machine springs to life. However, a loud creaking from outside soon indicates that all is not well. Realising that the water pressure is too high, Olaf makes to turn off his machine, but he is too late. With a final creak, the barrels outside both split and gallons of water pour down the roof of the throne room, scattering Nogbad's crows and washing the windows clean that they had been blackwashing so as to block out the daylight.

Olaf's great machine collapses inside the throne room, and its great pendulum swings clean through the wall. Cursing his failure, Nogbad leaps through the hole and makes off, unhindered by the confused and bewildered Nogs. From that day, the Nogs decided that time was something best left well alone, and never again was a clock seen in the Northlands.