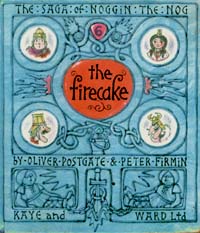 During one of his more dynamic inventive sessions, Olaf the Lofty manages to blow himself through the castle wall, and when Noggin finds him lying in the rubble, he is not impressed.  Olaf explains the power of his new invention, which he christens Firecake, but Noggin adamantly insists that if Olaf is to carry on working with Firecake, he must find somewhere else to do it.  Still excited by his discovery, Olaf decides to arrange a demonstration for all in the high valleys and runs off to arrange a picnic for the show, as Noggin goes in search of the master mason to repair the castle wall.

Olaf prepares his demonstration on Roundhead Valley, a high mountain valley where five rocks stand in a half-circle around a square rock, into which Olaf sets a bucket of Firecake.  As the demonstration starts, Olaf delivers a speech to the Nogs and tells them how his new invention will change the face of the world.  As the Nogs shelter behind the round rocks, Nooka calls Knut to her, who is idly making daisy chains.  Following the compulsory countdown, Olaf lights the fuse, and

As the smoke and debris clears, the stunned Nogs see that the square stone has been split down the middle.  Alarmed at the power of the Firecake, Noggin orders Olaf to destroy the remaining Firecake, and the recipe, forever.  As the Nogs return to their homes, Knut tells his parents of the daisy chain he made for one of the round stones and how it sung to him.  Tired from the days events, however, his parents pay him little attention.

As the next day dawns, Noggin looks from his windows and sees a thick grey fog.  However, when he reaches out, he realises that the fog is in fact hard, wet stone.  Closer examination shows the stone to be a ten-ton boulder, shaped slightly like a seated figure, wearing a chain of daisies on its head.  Realising the Olaf's demonstration had unleashed magic powers, a concerned Noggin orders Olaf to get rid of the rock.  Olaf sets about building a giant slipway, in order to slide the boulder into the harbour, despite Knut's protestations that the stone would drown.  As they argue, the stone begins to cry, and with this, Noggin relents and agrees that the stone can stay.

Knut befriends the stone, who sings back to him in a deep, sad song that only he can here.  During one hot, summer night, Knut climbs from his bedroom window and goes to sleep in the stone's lap.  As Noggin and Nooka awake the next day, they discover that, to their horror, the stone and Knut have gone.  Meanwhile Knut dreams of being carried by a giant to the high valley, where he sees a sword driven through five gold rings attached to gold chains that lead to each of the round boulders, each one of them a stone giant.  The giant then returns to the castle with Knut in his arms, to the relief of the Nogs.  Olaf tells Graculus how Noggin will now be glad that he has kept the recipe for Firecake in a tin box in his workshop, as Noggin will surely now want to blow up the stone giant.  Graculus tells Olaf not to be so foolish, and to destroy the recipe and Noggin ordered.  As the depart, a sinister crow flies from the guttering above.   Sure enough, as Olaf returns to his workshop, he arrives just in time to find a cloud of crows flying off with his Firecake recipe.

For days, Olaf and Graculus search for the stolen recipe.   Eventually, Graculus chances across the crows, who he follows to Nogbad the Bad's castle.  He returns to tell Noggin, who marches to Nogbad's castle with Thor Nogson and a detachment of the Royal Guard.  When they arrive, they find only a note from Nogbad saying that he has gone to fetch the Sorcerer's Sword, the legendary sword, the holder of which can command the obedience of everything in site.  As they read, they are disturbed by an explosion from Roundhead Valley, and with all speed they head there.

Graculus is first to arrive, but Nogbad is prepared.  He has his crows ready to take burning sticks from a nearby fire and drop them in the buckets of Firecake he has laid out should anybody challenge him.  He continues to dig at the sword, which is now showing in the rubble from Nogbad's explosion.  Knut and the stone giant watch unseen from the edge of the valley.  The giant tells Knut to make daisy chains for the remaining four round stones.

As the rest of the Nogs arrive, Graculus finds an old copper bucket that Olaf had used as a helmet during his own demonstration, and flies off to fill it with water, returning to dive-bomb Nogbad's fire and extinguish it.  Seeing that the fire is out, the Nogs charge, but Nogbad now has the sword.  As he raises it, all around freeze on the spot.  However, above the silence, Nogbad hears a strange, unearthly music.  He looks round to see the round boulders, each now topped with a daisy chain, slowly stir to life.  Terrified, Nogbad drops the sword and the spell on the Nogs is broken.  Noggin reaches forward to lift the sword, but Knut stops him.  Instructed by the giant, Knut picks up the sword and brings it down on a stone, the blade shattering like glass.  With a deep roaring sound, the giant boulders break away to reveal the four giants inside them.  The five giant kings, crowned with crowns of gold where the daisy chains had been, bow in thanks to Noggin and stride off across the hills to their homeland, as Nogbad makes his escape unnoticed.  As the Nogs turn for home, the peace is broken by one last explosion as Olaf destroys the last of the Firecake for good.