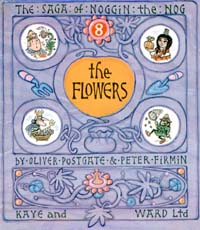 On visiting Noggin to bring greetings to the Nogs from the people of the Hot-Water Valley, it occurs to Ronf that the flora is very sparse compared to the lush and vibrant flowers that flourish in his fertile homeland. Walking with Noggin and Nooka, he expresses his sentiment, and Noggin agrees, pointing in particular to the eyesore of the ruined castle of Nogbad the Bad. However, as they near the castle, it becomes apparent that it is no longer as ruined as it once was. Entering the castle grounds to investigate, they are greeted by a strangely courteous and friendly Nogbad as he tends a magnificent garden. Surprised that such blooms are able to grow in this climate, Ronf enquires as to the flowers, not recognising any of them. Nogbad tells him that they are a particularly hardy breed, the seeds of which were given to him by a friend, and gives some of the fluffy seeds to Nooka to plant in the gardens of their palace. They thank the apparently reformed Nogbad and depart, but Ronf remains quietly suspicious as they head back to the palace.

That evening, Nooka plants the seeds against the castle wall, and by the next morning the wall is festooned with fresh green tendrils and large pink flowers. As the sun sets, the flowers start to wilt, but not before the plants have given up a new yield of seeds that scatter around the castle. The following morning, the Nogs are amazed to see that the new seeds have all grown into plants, covering the castle walls entirely. Never really one to appreciate the beauty of nature, Thor Nogson raises his sword to cut the plants away from an archway, but is stopped by Knut who politely asks the flowers to part, which they duly do, to the frustration of Thor Nogson who sheathes his sword. Delighted with the flowers, Noggin decrees that the plant is to be known as the "Royal Rambler", and is not to be harmed in any way. That night, as the wilting flowers once again shed their seeds, Ronf collects some of the floating seeds in a butterfly net.

The next day, The Nogs awake to find the whole town covered in the flowers. A concerned Olaf the Lofty shows Noggin how the plants are beginning to cause the stonework of the castle to shift, and Noggin begins to worry. He calls for Ronf for some horticultural advice, but the little man is nowhere to be found. Indeed, at this time, Ronf is sneaking into Nogbad's castle where he looks up the seeds in a catalogue that he finds there belonging to the Black Sorcerer. He soon identifies the seeds:

GRUNDELSTEIN'S GREATER GRIPEWORT. Hardy swift creeper. Stone-growing. Much used for breaking sieges, gates and castle walls. Good worker, intelligent and willing but not suitable for Magic or Black Arts as it has an obstinately kind and friendly disposition. Must be called away after use to prevent spreading.

As Ronf reads, he hears a rustling noise, which seems to be saying "Nogbad coming!" He realises that the plants themselves are trying to warn him and, too late, he tries to hide. This time Nogbad is not so friendly and casts Ronf into his dungeon. Seeing the strange plants outside the dungeon window, Ronf thanks them for trying to warn him. As he speaks with them, Nogbad walks past. No longer is he dressed in his gardening attire, but now he wears his familiar cloak and helmet and carries his sword. Nogbad tells Ronf that he is off to deliver the Nogs from the plants that have now overgrown their town, for the price of the crown of the Northlands.

Helplessly trapped in the dungeon, Ronf is at a loss for what to do when the flowers remind him of the seeds he still carries. He plants the seeds in cracks in the dungeon walls and watches them grow. He does not have to wait long before the wall starts to shift, and the eventually falls away to leave a large hole. Wasting no time, Ronf thanks the flowers and makes haste for Noggin's castle. As he runs, he sees a bird diving from the sky at him. He draws his sword and swings it high, but just in time recognises the bird as Graculus. Graculus lifts Ronf and flies him to Noggin's castle, where Nogbad is addressing Noggin and the Council of Elders. As Nogbad demands the kingdom in exchange for destroying the plants, Ronf asks Noggin for the small barren island that lies beyond the South Bay. Intrigued, Noggin agrees and Ronf steps forward and speaks to Nogbad and the Elders. With all eyes upon him, Ronf turns to the flowers and asks them if they are happy to be renamed "Noggin's Royal Rambler" and live in their own place in the kingdom. The plants agree, and Ronf asks them to cast their seeds, which Noggin's soldiers collect in their helmets. Seeing that his plan his thwarted, Nogbad sneaks away into a passageway through a mass of the flowers. However, as he enters the passage, the plants close up around him and whether or not he ever reached the other end remains unknown.

That night, as the plants wither, the Nogs set sail for the small island with the sacks of seeds they have collected. They plant the seeds on the island, and as they row back for the mainland they look back to see that the island is already transforming from a dull brown to a vibrant pale green. As they watch the island they are distracted by a noise like distant thunder. They look to the mainland in time to see Nogbad's once black castle crumble into ruins overgrown with the green tendrils and pink flowers of Noggin's Royal Rambler.