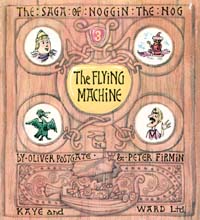 The years of peace and contentment in the land of Nog spell happiness for all of Noggin's subjects, except for the brave and mighty Thor Nogson, who finds himself bored with the lack of action. Noggin takes him down to the docks, where his inventor, Olaf the Lofty, is putting the finishing touches to a clockwork flying boat. As they arrive, Olaf and Graculus are deep in argument over whether the boat's wings should be covered in leather or feathers. Eager to have the boat flying as quickly as possible, Noggin sides with Olaf and decrees that the wings should be covered in leather. As they talk, they see an ornately decorated jar float past, which Noggin has stored in the royal armoury for later inspection.

Later that night, Thor Nogson and Olaf the Lofty hear voices coming from the jar. As they watch, the jar breaks open and a dark man with a rolled-up rug climbs from inside. The muttering man demands to see the Prince of the Nogs and, on being introduced to Noggin, offers the greetings of his master, Emir Ahmed el Ahmed, ruler of the land of Silver Sand. He unrolls the carpet he has with him, as a gift to Noggin from his master, and sits on it cross-legged. He asks about the state crown, that Noggin passes to him for examination. The dark messenger goes on to tell how a tall barbarian, claiming to be the rightful King of the Northlands, had told him of how the crown had been stolen by his wicked nephew.

As what the man is saying dawns on Thor Nogson, he reaches for his sword, but both he and Noggin are frozen by the man's magic as the carpet rises and flies from a window, taking with it the dark man and the stolen crown. Accompanied now by Graculus, Noggin and Thor Nogson rush to the harbour where they board the now-complete flying boat, wind it up and set off in pursuit of the thief and his flying carpet. As the boat gains on the carpet, the man turns and throws magic snuff at his pursuers, which turns into a great storm cloud and dashes the flying boat from the sky, tearing its leather wings as it crashes into the sea below.

The wingless flying boat drifts overnight, arriving in the morning at a small island full of very large birds called Great Orps. The next night, as the Orps sleep, Noggin and Thor Nogson tie ropes to their tails. As the morning breaks, they scare the Orps awake and the giant birds fly off, leaving their tail feathers behind, which are duly used to repair the boat's wings and the boat takes to the skies once more. When the adventurers touch down in the land of Silver Sand, they are greeted by the elderly Haroun ibn Daud, who tells how the evil Emperor Ahmed el Ahmed holds the land's true monarch, his nephew, prisoner. Having foreseen that Noggin would deliver his people, Haroun provides Noggin and Thor Nogson with disguises and a genie in a bottle.

Entering the palace through a secret door, Noggin and Thor Nogson witness the belated arrival of the messenger on his magic carpet, who presents the stolen crown to his master. As the Emperor claps his hands, Nogbad the Bad appears to receive the crown. Just as he is to be crowned, Thor Nogson lets out a sneeze, and the two are seized by the Emperor's guards. Brought before the Emperor and Nogbad, Noggin opens the cork to unleash the genie from his bottle, but the Emperor summons a much larger genie, and Noggin's genie quickly retreats to its bottle. As the Emperor contemplates the duo's fate, Noggin pulls out and strikes his gong, summoning Grolliffe, the Ice Dragon. Grolliffe soon defeats the Emperor's genie, and the Emperor and Nogbad beat a hasty retreat on the magic carpet, Graculus depriving them of Noggin's crown just in time. With the restoration of the young rightful king to the land of the Silver Sand's throne, Noggin, Graculus and Thor Nogson board the flying boat and start their journey home.