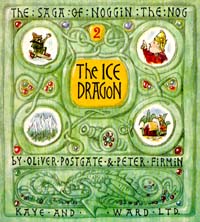 The tale of the Ice Dragon opens as Graculus comes across a very small and fierce sword-wielding individual by the name of Ronf, who hales from the Hotwater Valley. Ronf is on a mission to bring a message to Noggin from his people, so Graculus carries him to Noggin's castle, where Noggin formally receives his visitor.

Noggin learns from Ronf that the people of the Hotwater Valley are being terrified by a huge dragon, and Ronf echoes his people's plea for Noggin to rid them of the terrible dragon. Noggin agrees to help, and accompanied as ever by the mighty Thor Nogson and Graculus, he returns with Ronf for the Hotwater Valley on a sled hauled by 6 strong dogs.

Their long journey takes them high into the snow-laden mountains, where they come to the forest of Troldeskow. Fearing they would get lost in the deep forest, Graculus flies above them and guides them safely through the forest and to the foot of the great Glass Mountains. On seeing the mountains, the travellers strike camp for the night, but Graculus is haunted by distant memories that the place stirs in him. Although Graculus was hatched of an egg given to Nooka by a trader, he is unaware of where his true homeland is. Noggin urges Graculus to fly off and confirm his suspicions that he has returned to the land of his ancestors, and Graculus duly takes to the air as the others settle for the night.

The following day, as the party start their perilous ascent of the mountains, Thor Nogson spies what he takes to be Graculus. However, the arrival of further green birds followed by Graculus himself confirms that Graculus has at last discovered his true home. Suspended by their climbing ropes, the birds lift Noggin and his fellow travellers over the Glass Mountains and deposit them safely in the Hotwater Valley. No sooner have their feet touched down than they hear the footsteps of the passing dragon. Noggin and Thor Nogson set off in pursuit and, climbing high on a hill, are surprised to find that the dragon has vanished. It is then that they notice that they are actually standing on the dragon's back!

The dragon is keen to befriend the humans, but unfortunately, being an Ice Dragon, his breath accidentally freezes Noggin and Thor Nogson solid. However, the dragon takes them down to the hot geysers of the Hotwater Valley where he thaws them out. The dragon introduces himself as Grolliffe, and tearfully tells how he has recently been forced to leave his normally cold cave, it having suddenly become hot and full of smoke. Noggin agrees to investigate the problem, and the dragon flies both him and Thor Nogson up to the mouth of his cave. The brave Thor Nogson draws his sword and enters the steamy cave, where he discovers Nogbad shovelling piles of jewels and precious stones, the rightful property of the Dragons' Friendly Society, into sacks.

As Noggin goes forward to challenge his wicked Uncle, Nogbad blasts him back out of the cave with a cannon. Grolliffe then breathes his icy breath over the cannon, freezing it, and the adventurers, now joined by Ronf, enter the cavern as Nogbad makes his escape through a second cave and sets off for Lapland, stealing Noggin's sled and dogs. The now furious Grolliffe flies after Nogbad though, and with one icy breath, freezes him in his tracks.

The delighted Grolliffe thanks Noggin, presenting him with a gong and promises the assistance of the Dragons' Friendly Society whenever Noggin might so summon it. He then settles down to sleep for a thousand years, and the Nogs roll a tone across the cave mouth. Also delighted to be rid of the marauding Ice Dragon, the small people of the Hotwater Valley offer a lullaby: