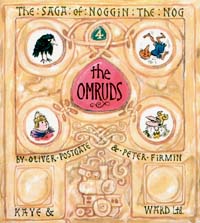 As a happy Noggin surveys his kingdom with satisfaction at the happiness of his people, he is disturbed to discover his Court Inventor, Olaf the Lofty, in low spirits. Olaf explains that he fears that the land of Nog has reached a peak and that there is nothing left for him to invent. As Noggin starts to console him, he is interrupted by an explosion as a small figure is jettisoned from under the ground. The figure rolls down the hill and into a stream, but is rescued by Olaf.

Warmed up and recovered, the small individual introduces himself as Groont, an Omrud and Court Inventor to the King-under-the-Hill. He is clearly very excited about his latest discovery, albeit the discovery that had just blown him out of the ground and nearly drowned him. Groont pays his respects to Noggin, thanks Olaf for saving his life, and disappears back under the ground.

Intrigued as to what the Omruds could have invented, Olaf returns to his room. As he thinks, there is a knock on his door. Opening the door, he discovers a small green glass jar on his doorstep which duly walks into his room. The jar tips over to reveal Groont inside, who explains that, living underground, the light of the sun hurts the Omruds' eyes, hence the jar. He continues that in appreciation of Olaf saving his life, the King-under-the-Hill has decreed that Olaf is to have the secret of Groont's invention. He passes Olaf a piece of paper, which reads:

The mountain stream runs swiftly;
Hold it fast in iron.
The fire burns like the sun;
Keep it close.
The mist rises and blows away;
Catch it. It is your servant.

and with that, he departs.

Olaf studies the paper for hours, puzzled, until eventually an idea dawns on him and he sets about frantically working through the night. The next day, Olaf discovers the success of the Omruds' invention as an explosion sends him crashing through the castle walls. Overjoyed with his discovery, Olaf sets about making a machine to pull Noggin's carriage on his birthday parade.

The day arrives, and Olaf hitches his "fire machine" to Noggin's carriage and, amid a cacophony of noise, starts forward, towing Noggin, Nooka, Graculus and Thor Nogson to the cheering of the crowds. Excited by his success, Olaf opens the valves of his steam engine and the machine moves faster and faster, soon getting out of control. Thor Nogson, fearing for the safety of his king cuts the rope joining the carriage to the machine, and Graculus just manages to pluck Olaf to safety as the steam engine plummets over a cliff edge. As Olaf weeps at the end of his machine, he sees three Omruds laughing at his escapade. Furious, he chases the Omruds into a cave and underground.

As the days go by and Olaf fails to reappear, Noggin forms a search party with Thor Nogson and they go in search of Olaf. They soon encounter the King-under-the-Hill who tells them how the Omruds have been driven from their caves in Nudrug by a tall man accompanied by an army of crows. He then takes Noggin and Thor Nogson to his laboratories, where they find Olaf happily working on a diminished fluid, designed to shrink things. Olaf demonstrates the fluid on a cabbage, but unfortunately the cabbage grows instead of shrinking. Disappointed at his failure, Olaf returns with the others to the castle, where a crow swoops down and grabs the fluid from Olaf's hands and flies off for Nudrug, pursued by Graculus.

On arriving at the caves of Nudrug, Graculus is captured by none other than Nogbad the Bad. Luckily though, he manages to trick his way out from Nogbad's grasp and escapes to tell Noggin what he has discovered. As the Nogs prepare to launch their flying boat to recover the fluid, Noggins castle is swarmed with giant crows who also bring Nogbad. Nogbad tries to assume Noggin's crown, but the brave Thor Nogson challenges him to a fight. The cowardly Nogbad agrees, but only after spraying himself with the fluid and growing to twice the size of Noggin's champion. Unwilling to fight a cheat, Thor Nogson withdraws his challenge. However, from under a paving stone climbs an Omrud, armed with a spray, who challenges Nogbad. As Nogbad laughs, the Omrud sprays him with the new fluid and Nogbad shrinks to the size of the Omrud, who quickly overcomes him and drags him underground as Noggin's guards fend off the giant crows and shrink them with the new diminishing spray.

The delighted Kin-under-the-Hill presents Noggin and Nooka with a cage containing the shrunken Nogbad. Unfortunately, when no one is looking, Nogbad is able to spray himself and shrinks small enough to climb through the bars of the cage, promising vengeance as he makes good his escape with his crows. Unperturbed by his escape, the Nogs set about building a beautiful garden for the King-under-the-Hill, complete with Omrud-size animals with the help of the diminishing spray.