Noggin the Nog played well upon the crumhorn and Nooka, his princess, was good on the lute.  Often they had musical evenings in the castle hall.  Olaf the Lofty, the court inventor, did not care for the plain-song and madrigals that pleased Noggin and Nooka.  For him music was meant to tell of great battles and stirring deeds of glory in days gone by, of storms and earthquakes and interesting things like that.  He liked music that thundered and howled, that filled the heart and battered the ears.

So, Olaf, having no use for lute and crumhorn found a disused quarry and there he made his massive instruments.  A battalion of the Royal Guard were ordered to play them and before his Prince and the assembled Nogs, Olaf conducted his Gargantuan Symphony... 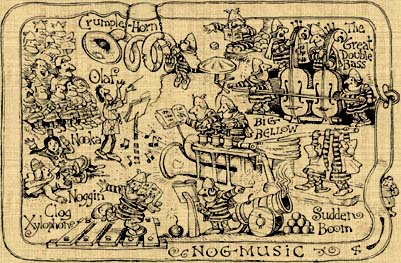 The audience did not like it and left early.

So you'll not find any of Olaf's compositions here.  You will, however, find the work of the late Vernon Elliott who composed the music for Noggin the Nog's adventures.  There's two types of music for you to download:  midis that I've written from the musical score, and a number of short samples taken from the original stories.

The following midis were written by me from the score of the Northlands Suite by Vernon Elliott.  I'm somewhat of a beginner when it comes to written music, so if there's any musical whizzes out there who could improve on these, please get in touch..

March of the Kind Giants

Here's a few short samples of Vernon Elliott's music from the Noggin the Nog stories. The music is sampled at a low rate and in mono, but as it was recorded in 1959-61, the original quality is not that much better.  Besides, I think the aged quality adds to the overall Nog atmosphere.  You'll find all of these pieces of music elsewhere in the site - they should play as some of the main pages download if your browser supports this feature.  Apart from "Polar Landscape" and "Song of the Nogs", the names of the samples are just my own, by the way.  Just click on the cassette icon to download the samples.

The Land of Silver Sand

Song of the Nogs